Skip to content
Issue 147: Find the Stocks Jonathan “Swears” By - Masters In Trading

Find the Stocks Jonathan “Swears” By

Predict the future of oil refining stocks with this high-probability trade.

The crack spread is simply the difference between the prices of crude oil and refined products like gasoline and diesel fuel. By following the crack spread, you'll be able to predict where oil refinery stocks are headed with amazing accuracy. It's an incredibly high-probability trade that my members have taken advantage of many times throughout the year.

We're hosting a live class next Wednesday all about Cracking the Code of Crack Spreads. Grab Energy EDGE now to join us on Wednesday for this exclusive class. (Already have Energy EDGE? Email us to see how you can attend)

A Trader Who Swears By His Stocks

For years, I have been the go-to trader for many investors looking to make some serious money in the stock market. My research and insight into stocks and options was unparalleled and my trade ideas always seemed to be spot on. In fact, since 2015, long-term clients of mine have seen remarkable returns from following these highly researched trades.

It was pointed out to me recently that there is an accurate “tell” that would predict my most successful trade ideas. 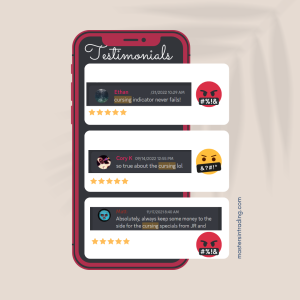 It turns out, the traders who followed me closely noticed that whenever I became really enthusiastic about a trade idea, I use bad language and this would be an ‘indicator' that it would be extremely profitable. Rest assured, when the cuss words started rolling, the trade would turn out to be highly lucrative – if they acted upon it quickly.

I didn’t realize I was doing this at first; however, after being informed of the trend by loyal followers, I started using colorful language more often when talking up my best trade ideas. Now, it’s second nature!

This one worked quite well. Notice one week later and these options are up 4x!

Since then, long-term clients have continued to reap huge returns from investments based on my “swear words” strategy – proving once again that sometimes even something as simple as bad language can lead you down a path towards success when applied correctly!