Skip to content
Issue 19: Tracking the Daily Activities of the Federal Reserve - Masters in Trading Digest

Tracking the Daily Activities of the Federal Reserve

Welcome to Issue 019 of Masters in Trading Digest.

In today’s FREE MIT Digest, Pablo Lucena shares thoughts he has had from tracking the daily activities of the Federal Reserve.

He then shares a cool trade idea for Bond Traders.

Jonathan shares what is easily the Best Trade of 2022 thus far, darn close to 20x return!!!

We think you’ll enjoy this one!

Likewise, the Eurodollar futures curve has shown a very similar structure for several months. We’ve been talking about this with our Futures members since it first occurred during the ending months of 2021.

While the backend of these “money curves” has been inverted, the front end of these curves has been steepening!

Notice the data presented above on 01/26/22. There’s a steady increase in the rate the government notes and bonds yield until you get to 20 years, and then the rate drops?

What can we glean from the money curve structures?

For starters, these curves have been screaming out:

“Yes Chair Powell, we believe you! We know you’re going to raise rates, perhaps aggressively, in the short term [front curves steepening, before the Fed’s announcement, and after]. However, we consider these actions to not be positive for the economy long term [back end of curves flattening to inverting].”

Powell briefly hinted what we consider to be the most important factor affecting the economic outlook: slowdown in Fiscal support.

Recall that as part of “stimulating the economy”, the Fed implemented a monetary policy of low rates, large asset purchases (QE), no reserve requirements, among other things. But we also received an enormous, and more “powerful”, economic stimulus from the Fiscal policy that also went into effect.

When the Fed stimulates, it does so with “Interbank money” (reserves – only useful to entities with accounts at the Fed). But when the Treasury stimulates the economy by depositing a check into your bank account (Fiscal Stimulus), with no “debt” attached to it, it stimulates the people – you, me, and the rest of the non-government sector.

The slowdown in fiscal spending has been seen over the past month. At this time, the government is having days where more taxes are collected than money spent into the economy. 2021 was a year of large capital gains for many – well, the “tax man” is here collecting, draining this buying power out of the economy.

FYI: The left axis on the following charts denominated in Millions USD. Thus a print of 40k means the 10day, daily tax revenue collected, per day, by Treasury were 40 Billion USD. Since 40,000 (40k) Millions == 40 Bln. Everything on these charts is denominated this way, since this is how the Treasury reports it. Yeah, it's no joke of an account. When the smallest whole unit of measure for reporting is in 1 Million USD increments, We think it's wise to pay attention to what it's doing, and the importance of the fiscal flows on the entire economy. why these flows matter so much…hope this “sidenote” helped shed some light on why this infrequent topic to even have to bring up. Daily Treasury Analytics – One of our many “Edges” we use when deploying capital.

The screenshot above shows the 10 day average daily government tax inflows over the past 5 years.

We track daily what the Treasury is doing.

Is it spending money into the economy, or is it “growing its savings account”? The chart below shows us over the past 5 years the velocity of fiscal spending or contraction in spending. Think of this like your own checking account at your bank. If it's growing due to you depositing more than you spend, naturally the balance in it will grow as your expenses decrease. What happens when you’ve built up your account for an emergency, and the emergency shows up…? Normally, you spend what’s in the account to deal with the emergency (or use debt, but for this argument, both are forms of paying for stuff).

When we see the Treasury taking in more deposits than it does withdrawals from its account, coupled with rising taxes […just so everyone is following me here, a tax collected results in a “deposit” into the Treasury's account. Think of it as their “paycheck”.

Normally, any such “income” is spent right back by the Treasury, as we've been running deficits for years now…but not for the past month or so, we've been at a surplus,  thus the cause for concern….]

We can have a broader picture of what’s happening, and perhaps interpret what the money curves have been telling us for the past months…if nothing changes, the economic outlook looks quite weak.

We can track back for example what the S&P 500 index, or what BTC and ETH, or any other market-based metric have done when the government is spending money vs when it's in “saving” and “taxing” mode.

This is market bearish, thus if it continues, I frankly think index funds will get hit the most, while individual stocks in undercapitalized sectors such as some commodities will excel in this environment.

At this time, the BOB spread (20s-30s) continues to be inverted! What a stubborn spread! For any of you that took this trade months ago, as I did, with hopes of seeing the backend (un)invert at some point have not yet been fulfilled.

However, CME is due to release a brand new 20Yr future contract, much like /TN was created for the brand new “On The Run” 10 yr notes, and /UB for the freshly issued 30 yr bonds, there will now be an equivalent for the 20yr.

This event should, more likely than not, trigger a change in Cheapest To Deliver security for /ZB, as simultaneously one is discovered by the market as soon as trading begins on the new contract.

Treasury has been issuing 20 yr Bonds once again for the past 2-3 years after not doing so since 1986. Currently it tends to auction about  22-27 billion USD of 20yr bonds during each monthly bond auction (one new issue, plus 2 reopening monthly auctions).

The trade idea would be to buy ZB and sell UB.

This trade is covered in the Masters in Trading Futures Program, and is actively discussed in our Futures Discord Trading community.

At Masters in Trading we offer a 6-month program for those interested in our top-level of service.`

In this group the focus is “return on capital”.  That’s it.  Let’s grow our darn trading accounts.

We look for trades in stocks, options, bonds, futures, and NFTs.

On December 12th, I shared an idea with the community.

The idea was to purchase a new NFT coming out called #PROOF.  Matt was able to secure one of these NFTs 1 Ethereum, December 12, 2021. 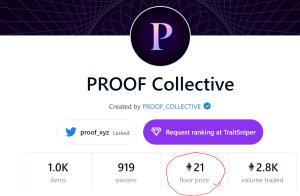 How’s that for a nice monthly return?

What Else You Need to Know

Have you seen our new blog?

My first post was Self Reflection – My Journey with NFTs ad Ethereum.

Long-term Masters in Trading client Stacy Brovitz shares an important take on the benefits of paper-trading in Why an Advanced Trader Paper Trades.

Check these out, and many others at Masters in Trading Insights

With the market continuing to be volatile, it’s important for traders to trade with less size, and widen out levels.

Traders need to adjust orders and risk parameters with the present volatility in the market.

We will discuss this more in the next issue.

Reminder – our Sunday Week Ahead Member Options trades will be emailed to Wiretapper members by 4pm EST Sunday.

Try the Wall Street Wiretapper For Only $47 First Month Trial