Skip to content
Issue 46: This Crazy Week in Review - Masters in Trading Digest

This Crazy Week in Review

Welcome to Issue 046 of Masters in Trading Digest.

In today’s issue of the Digest, we notice something BIG brewing in Ethereum Hash Rates.

Another Lock-Up trade “free-falls” less than a month before the full amount of restricted shares expire. Learn this consistently reliable trade.

And as always, new trades are released Sunday evening for our members.

On March 30th, we shared a trade in our Discord. It was a Lock-Up trade in $GFS.

Since sharing this trade, $GFS immediately began selling off:

Those are the high probability trades we search for.

Enjoy the EBook: The Power of the Lock-Up Trade and learn the Lock-Up trade. It’s a trade you’ll have forever.

HEARD IN OUR DISCORD - SOMETHING BIG IS BREWING

Something big appears to be brewing underneath the ETH network – in a good way. We just hit a new high in both network hash rate and of course network difficulty. It was a sudden burst, especially today, sending net difficulty to 13.6 PH, a figure ETH has never seen. The accompanying hash rate during this time was above 1PH/s, which was yet another all-time high.

Since right around November 2021, when the price of ETH began to go down, the hash rate (and difficulty) remained elevated. When these 2 things happen simultaneously, the miners get less profit and thus tend to not stay that way for long [this is my own conclusion. I have no evidence other than gut feel and mining ETH for the past 12 months or so].  – Pablo Lucena

To make matters even more dire for miners during this time, gas fees were unusually low, and remained low for months! A 3rd factor that hurts miners already in a pinch was the lack of new “airdrops”, or popular new NFT projects minting new tokens, which was at the root of the lower fees. Less traffic on the network results in fewer costs to pass messages on it.

Things began changing on 2/24/2022 [the MIT February Special], as the ETH (and BTC) price put in a bottom and have been rising since. But, price alone doesn't show us the whole picture. On Monday, March 28, 2022, gas fees rose nearly 30x for several hours. Quite unusual, especially after 4 months of very steady and low gas fees. Then today, March 30, 2022, the network hash rate and difficulty jumped to new all-time highs. Gas fees are about 2x what they have been over the past 4 months.

I smell a move nearby. 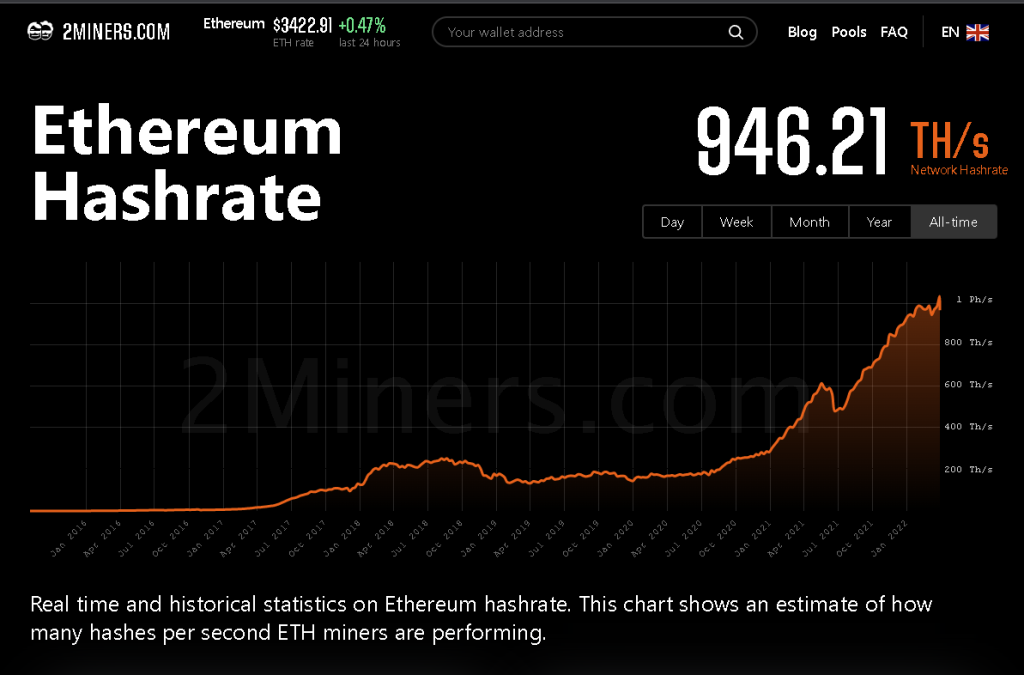 On top of the message above, consider that energy costs around the world have been rising. Especially for European countries. It's difficult to say with 100% accuracy, but based on the top 10 largest mining pools (with the largest share of hash rate), about 35-40% of the Ethereum hash rate comes from Europe. The USA is the second-largest contributor. At times, we overtake Europe's hash rate, but then they come back with more.

Surveying other proof of work coins, it's quite clear that people with hashing capacity, energy, and cooling are mining ETH or its younger version, ETC.

ETC has specifically gained lots of hash rates as the ETH network rendered GPUs with 4GB of GRAM or less useless. That 4GB quickly became 5GB. 6GB cards still have several more years. As the 4 and 5 GB cards stopped being able to mine ETH, they've looked for a new coin to mine. “Monero” has seen some uptake, but besides that privacy coin, most of the hash rate has gone into mining ETC. It has undergone some changes which make mining it quite attractive.

I believe ETH will test its previous all-time high and then continue rising at least another 23-27% – assuming the network hash rate stays the same. But, if the demand to use the network rises or the capacity of the network grows above 1PH/s and sustains it, I believe the time for another fast leg up in price is among us.

Every Sunday, we research trade ideas and share our best with Wiretapper Options members.

You can learn more about Wall Street Wiretapper Membership on our website.