Skip to content
Issue 7: Massive Inflows in Turkish ETF, Most Since 2018 - Masters in Trading Digest

MASSIVE INFLOWS IN TURKISH ETF, MOST SINCE 2018

Welcome to Issue 007 of the Masters in Trading Digest.

This is my favorite time of year. I get to relax a little and spend time with my wife and kids.

It keeps it all clear for me – why I do what I do. I hope you have a wonderful time as well.

Unplug and enjoy. I know we will.

We'll be back sharing member trades, and continue live classes on Monday, January 3.

In today’s Digest, we discuss some very unusual trading behavior in a Turkish ETF:  $TUR.

Will Turkey be the next El Salvador?

Did Miami release it’s own coin?

And the importance of following the Yield Curve and learning to follow Bond Futures.

(Bloomberg) — An exchange-traded fund focused on Turkish stocks had its biggest daily inflow in more than three years last week, as government measures to shore up the nation’s battered currency prompted the biggest surge for the lira in decades.

At Masters in Trading, traders are taught to follow big orders to see where funds are deploying their clients' capital. These orders in the options market are referred to as “unusual options activity.”

$TUR has been extremely volatile after these massive option trades – for instance, on December 20th $TUR traded down to $15, and has since rallied to $22, the last trade at the time of writing is $20.15.

This wild trading activity suggests that something is going on with $TUR.  Fund managers do not trade this amount of volume based on a hunch.  Rather, they most likely know something the general public may not.

That’s how I think at least, so I started digging deeper, and look what I found: 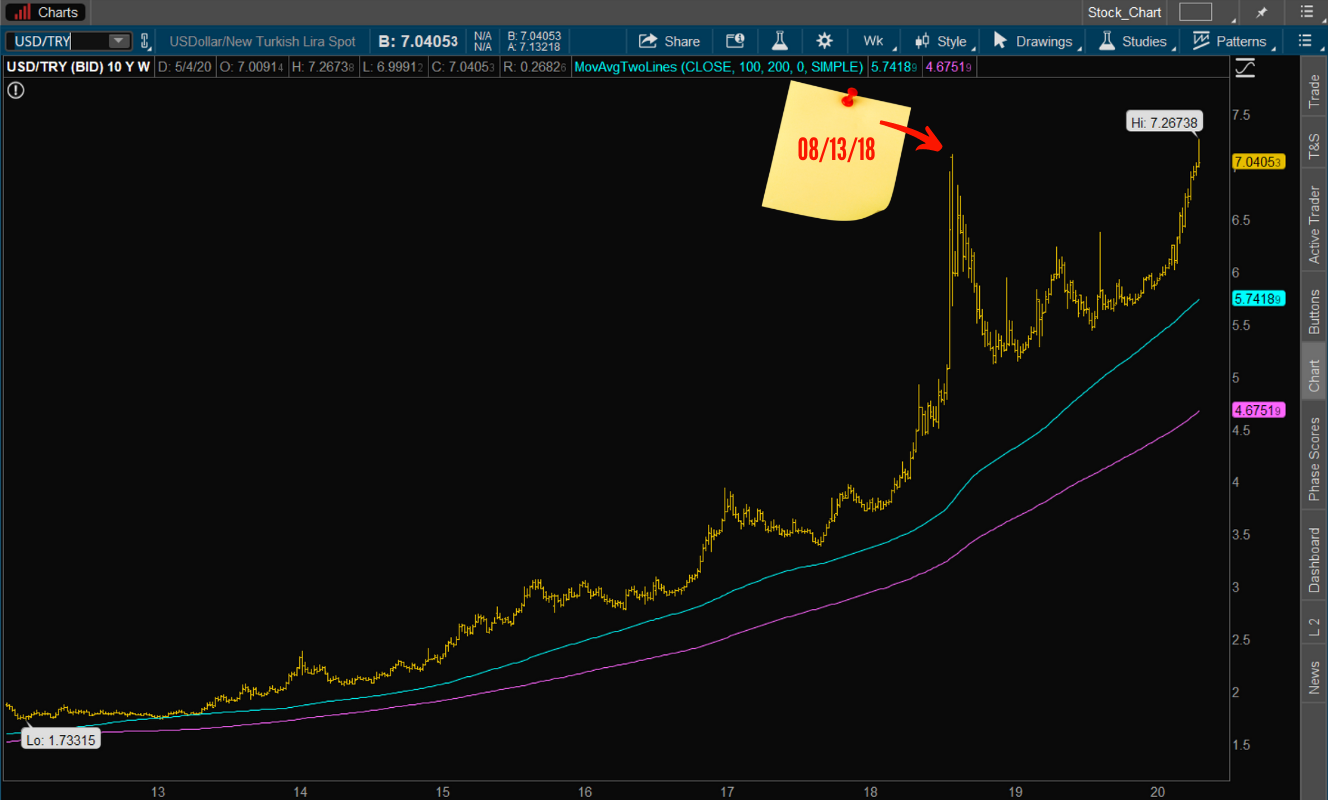 The chart above shows the price of the USD against the Turkish Lira.

The Lira has weakened more than 20% against the dollar since September when the central bank began cutting borrowing costs amid soaring inflation. Turkish assets have been on a rollercoaster ride ever since, with volatility last week triggering circuit breakers in the local stock market.

Notice the post-it on the chart (above)… I labeled the date 08/13/18, the last time the USD/TRY traded at these levels. 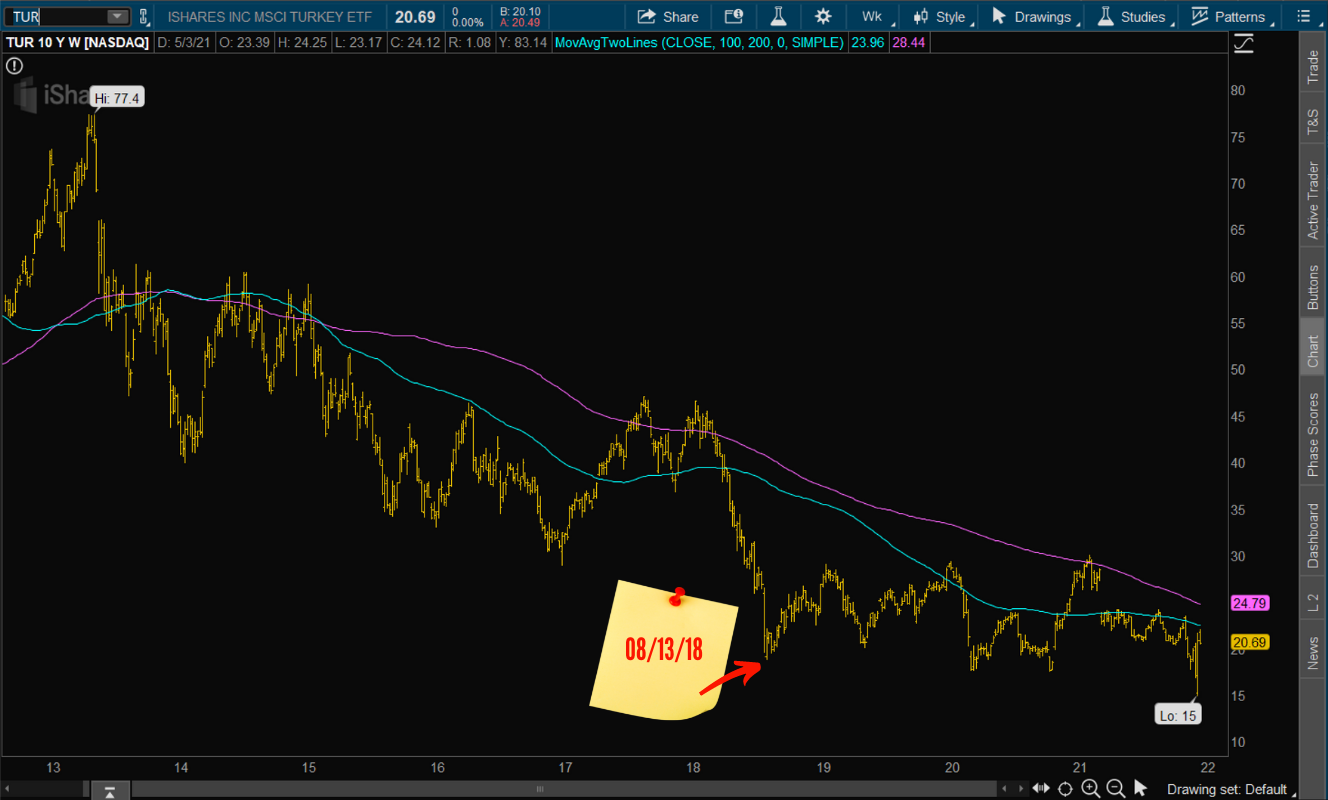 The next chart shows the country's largest ETF $TUR.  I labeled 08/13/18 on this chart as well.  This was the date that $TUR began to rally off a long-term downtrend.

After discussing the unusual options activity behavior with Pablo Lucena he has some interesting thoughts:

“Here’s what I’m thinking. El Salvador became the first country to issue crypto-denominated bonds, a few weeks back. This came after the city of Miami became the first city to issue its own coin, from which the city has profited and plans to distribute against to residents of Dade county.  I think Turkey is going to follow El Salvador and try to save its currency vs the USD by using ETH as the backing asset.” – Pablo 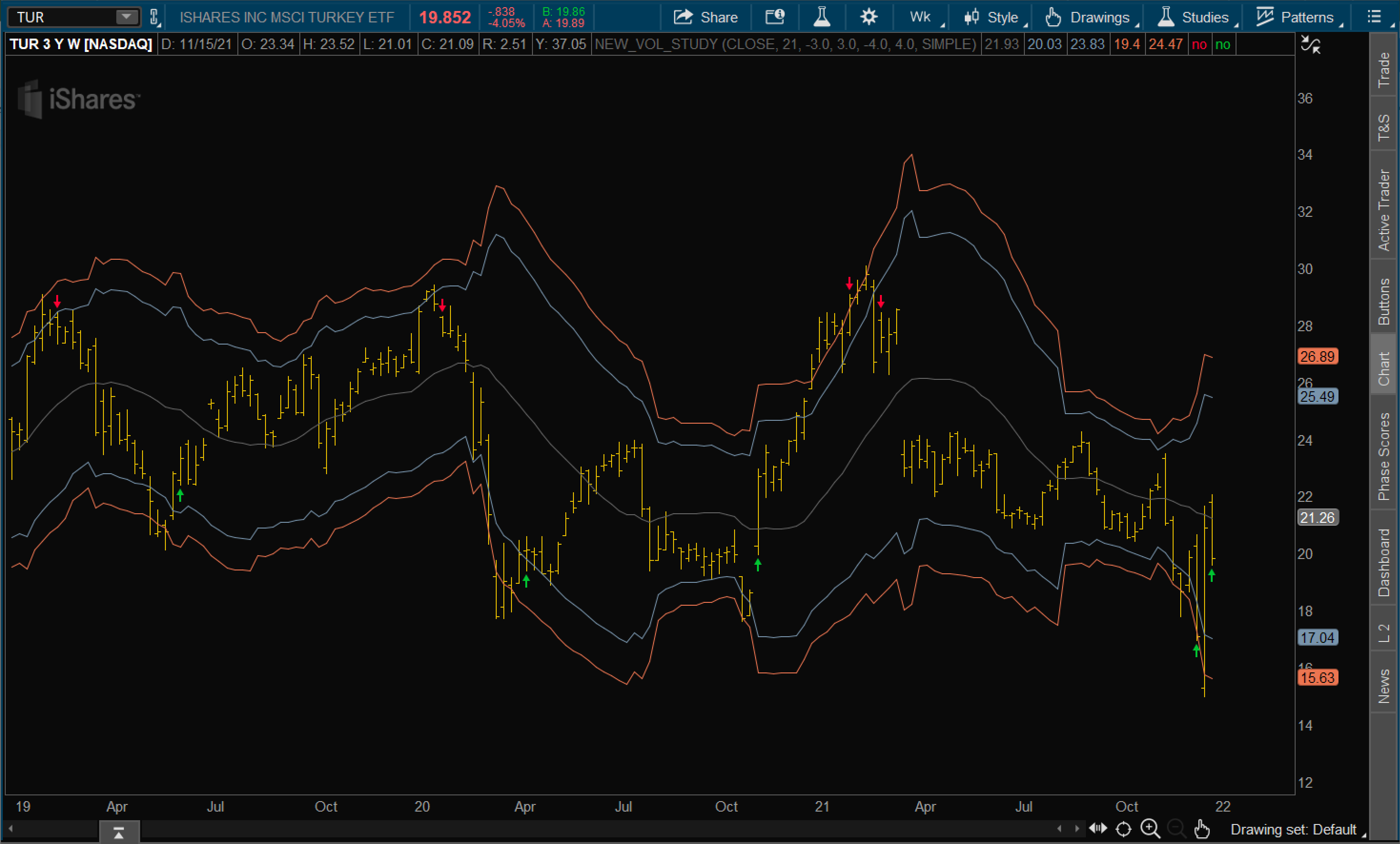 This is a story that I will continue to research before deciding on a trade to share with the Masters in Trading options community.  Every Sunday evening, we share trades with the community and come together for a live class on Mondays so Pablo Lucena and I can explain the trades, and answer any questions traders may have.

I definitely would not trade $TUR until 2022.

The next step is to value the options, and to decide on a time frame for the trade.

All members should expect more research delivered on the opportunities in the $TUR ETF.

To join the Wiretapping' Options membership for a $47 first month special.  After your trial, the monthly subscription price is $147 which includes access to the scanning software, a voice in our active Discord community, trades every Sunday, and a live class Mondays.

HEARD IN OUR MEMBER DISCORD 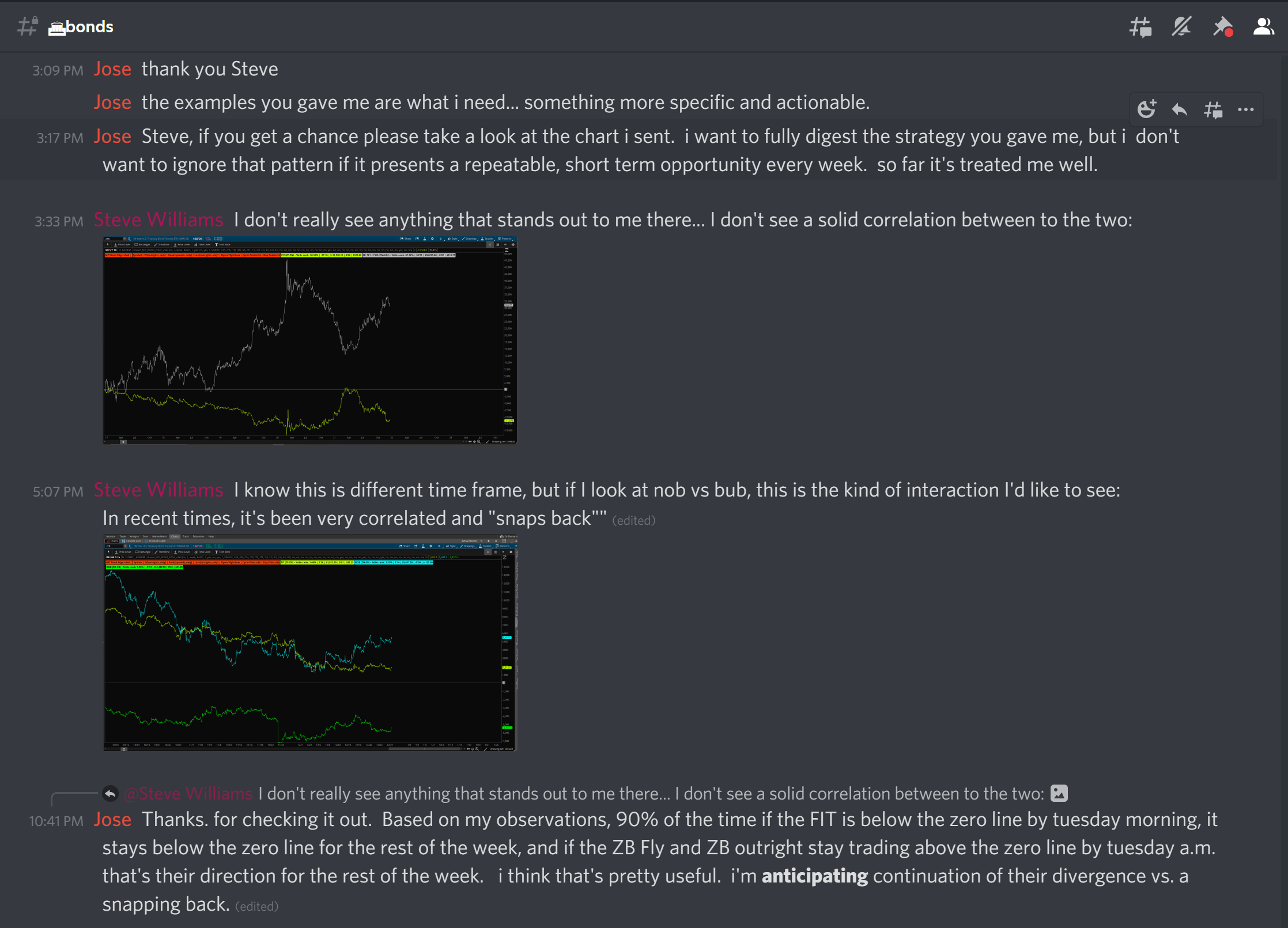 The foundation of Futures Trading at Masters in Trading is taught through Bond Futures.

Once traders learn our approach to Bond Futures, learning the other asset classes becomes a breeze.

When an options position moves in your favor what should you do?

If you cover positions too early, you risk missing out on HUGE profits.

Missing the big move is almost as frustrating as having a losing trade.

This video will teach why you should NEVER give up your optionality.

3 Ways to Manage an Options Contract

The next issue of the MIT Digest will be released Friday, December 31, 2021.

Friday’s issue will reflect on some of the biggest market movers of 2021, and what we should prepare for in 2022.

Until Friday, trade smart and always manage your tail-risk.

Have a wonderful holiday season.