Skip to content
Issue 79: The future with futures - Masters in Trading Digest

Welcome to Issue 079 of Masters in Trading Digest.

In today’s Masters in Trading Digest, we discuss potentially the best Futures trade on the planet.

We’ve been taking money from Mr. Market going back to 2003 trading Bonds. Today, we’ll share the foundation of our favorite trade.

If you missed yesterday’s Futures presentation and its complimentary PDF, the webinar recording will be available for the next 48 hours.

The yield curve is a central element of every government bond valuation, as it informs us about the specific valuations in their macro context.  We strongly believe that the share of the yield curve is the most important, forward-looking indicator for all traders.

The current yield curve with accurate and continuous maturity statements across the horizontal axis is supposed to look like this: 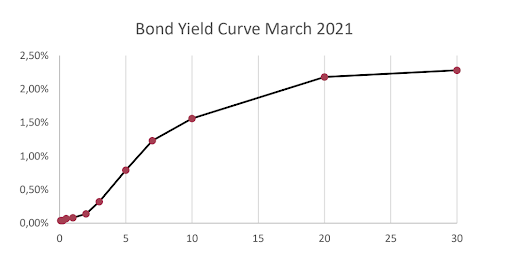 The yield curve is also sometimes displayed with a horizontal axis that does not take the exact numerical values from year 0 to 30 on a continuous scale into account.

Instead, only the relevant and tradeable bond maturities are specified which makes the normal yield curve from above appear like a straight line with a positive slope.

The difference between the current and a healthy yield curve would be the overall level.

Last year we were in an almost zero interest rate environment, which explains the very low rates, especially in the beginning of the curve.

Normal Yield Curve: It has a concave (curved outwards) shape and it implies that the economy is in a healthy state, not in a boom or a bust cycle. In this environment, every bond yield is followed by a higher yield when we go from lower to higher maturities.

Steep Yield Curve: When the bond yield curve gets even more convex than it already is in the normal curve, it becomes a steep yield curve. This environment is caused by an increased gap between short-term and long-term yields. It indicates that investors expect rising inflation and stronger economic growth.

Flat Yield Curve: When the curve is basically flat from beginning to end and there is only a minuscule difference between short-term and long-term bond yield. It either means that investors are anticipating slower economic growth or that investors are expecting the federal reserve to raise interest rates.

Every bond trade seeks to restore the correct curve and eliminate any mispricings in its process. Depending on the economic environment, however, the correct momentary curve could be inverted or flat etc., which is why it is very detrimental to stay in a trading position based on a subjective yield curve outlook that is getting proven wrong by the market.

In order to trade the yield curve efficiently, financial instruments like ETFs or futures are needed.

The most important bond futures and ETFs are: 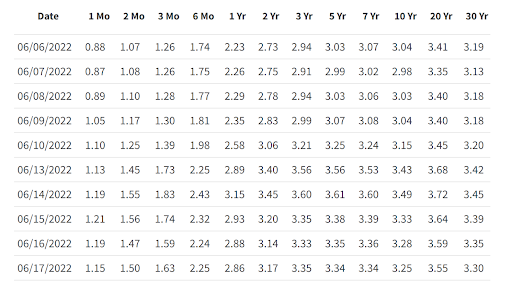 You can lend money to the US Government for 2 years and get the same yield as if you loan that money for 30 yrs.  That’s what makes this environment FLAT.

Interested to learn more about potentially the best Futures Trade on the planet?

This week is all about volatility.

Will the market recover?

We will answer these questions and more…

Keep your feedback coming into support@mastersintrading.com. We’re excited to share your feedback along with fantastic suggestions for upcoming issues.

Until then, trade smart and always manage your tail risk.