Note: the example discussed in this article is from Jun 22, 2018

Today, I'm going to show you a very simple trick/style of analysis in trading equity indices futures that I think will really help you going forward.

In front of you are S&Ps. As you can see my charts are very, very clean. I have been trading for 18 years, the last thing I want on my charts is lots of lines. I want things very simple. 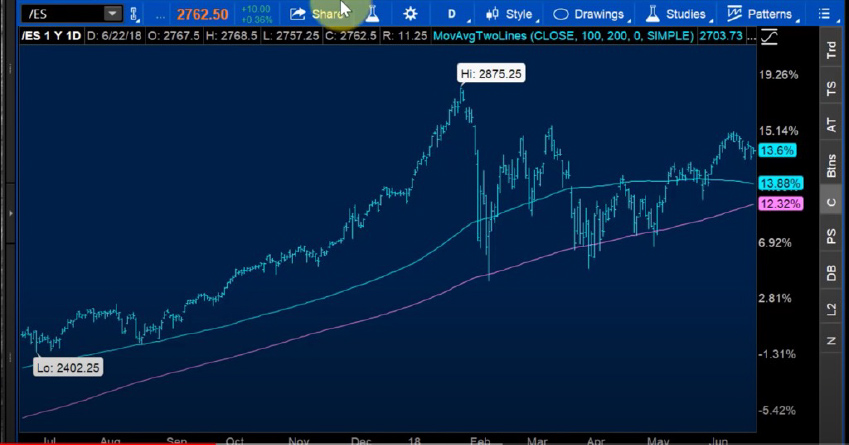 Let’s take a step back. I want to use common sense. So, if you just go into the settings box, we want to show price as a percentage because we're going to do a relative value analysis. Instead of it just showing the price, it's going to show us it's up a certain percentage over a specified timeframe. These are just basic 100 and 200 period moving averages.

When I'm looking at equity indices, and I'm deciding on what trade that I want to do, too many people are looking to buy, sell, buy, sell, but what they're really doing is they're not allowing the market to move. Rather than that, what I want to do is look at things from a relative value standpoint.

Here's what I'll do as far as analysis. Instead of just looking at the S&Ps, I want to look at other correlated indices. If I hit the beaker icon on the top of the screen I'll remove those moving averages, and then add a comparison. We’ll go to comparison, then add selected, and let's compare the S&P to the NASDAQ (NQ). You don't need the left axis. Let's also compare it to the DOW, and the Russell. Right now, we're just going to do the NASDAQ and the DOW. I want you to see the correlation. I want you to see how these are going to push and pull off one another. 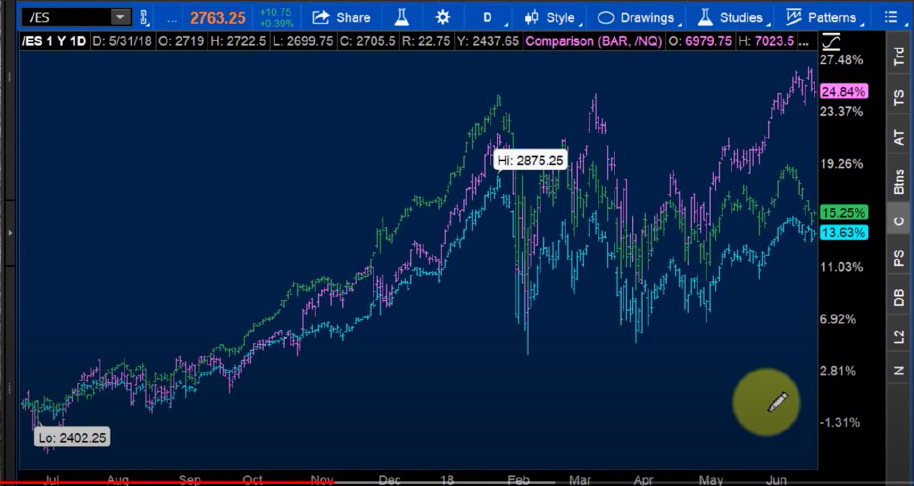 Now the key in making sure that your charts are set up correctly is that obviously it needs to be on the relative percentage setting. If I were to add more data to the chart, let's say we go on a weekly basis, the chart and its percentages will readjust. All the indices percentages are going to have the same starting point. Then they're going to break apart, and they're going to come back together. The pink is the NASDAQ. The NASDAQ is strong, but the terminology that we use is “nothing is ever strong”. Rather, the NASDAQ is strong relative to the other indices.

The DOW is going to be the green, the S&Ps are going to be the blue. Now, if you go back and look at the historical behavior, what you'll notice is DOW gets expensive. NASDAQ gets expensive relative to the S&Ps, but look how it corrects itself. Comes back to a better semblance of value. When they break apart, see how they correct themselves. In this example, the NASDAQ is very expensive relative to the other two indices.

Try this out. Everything that we do in life, every buying decision we make, we make using some kind of relative value analysis. When you buy a home, when you buy a phone, it's all relative value. When you're trading, that needs to be relative value as well. Again, nothing's expensive. Nothing's inexpensive, only if they're inexpensive or expensive relative to something else. That's something else obviously needs to be a highly correlated product, but it's a great way so you're not just trading one chart and trying to play a breakout or looking for little patterns. This will hold you accountable. Try it out. If you like it, leave a comment in the YouTube comments section. I'd love to hear it. If you have any questions, I'll make sure to get back to each question.