As you may already know, the Nasdaq is the second-largest stock exchange in the USA, with 3300+ companies that trade on its platform. These companies are primarily technology and Internet companies with a few exceptions in financial services, consumer goods, industrials, and biotechnology.

Historically, both indices (i.e., the Nasdaq and the Russell 2000) have had high rates of correlation. Conceptually, this makes sense. Both indices track the performance of American companies. Therefore, both indices should see growth as long as the broader American economy is performing well. During COVID-19, though, this correlation declined meaningfully. While the underlying companies in both indices remained the same, investors’ view of external factors contributed to a sell-off in one index that was significantly more pronounced than the other.

In this article, we dive into the reasons why this correlation trend can ‘break’ and how traders can take advantage by entering the right markets at the right time.

Since February 2020 – the ‘beginning’ of COVID-19’s impacts in North America – the Russell 2000 index has been a reasonably accurate proxy for market sentiment regarding the pandemic. Starting from February 14, 2020, to March 20, 2020, the Russell 2000 declined a staggering 40% as traders braced for the impending economic consequences that the pandemic could and would unleash. The Nasdaq fell by a comparatively lower 29% in the same period.

In short, during the early days of COVID-19, traders believed that the smallest 2000 companies in the Russell 3000 index would see detrimental and longer term impacts to their business as compared to the Nasdaq, which is typically more populated by stocks with a mid to high market capitalization (large-cap stocks; think Alphabet, Apple, Netflix, Amazon, etc.) 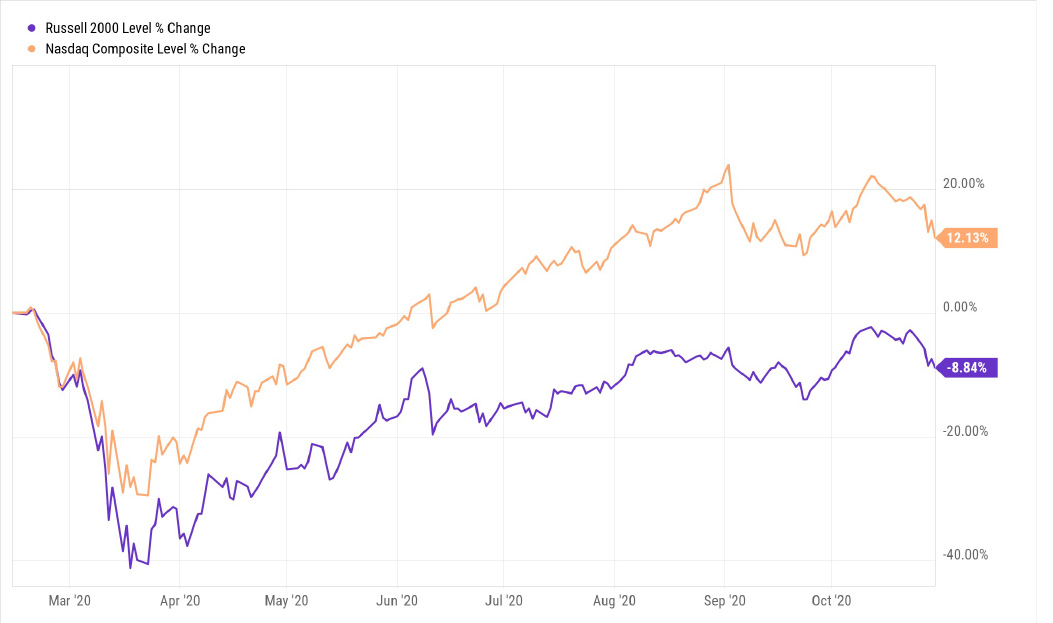 However, this trend reversed dramatically when the market believed that the worst of the pandemic was behind us. Driven by the optimism around the rollout of vaccines, the Russell 2000 index rallied 46.4% from October 2, 2020, to April 2, 2021 (chart below). In the same period, the Nasdaq was up 21.7%. 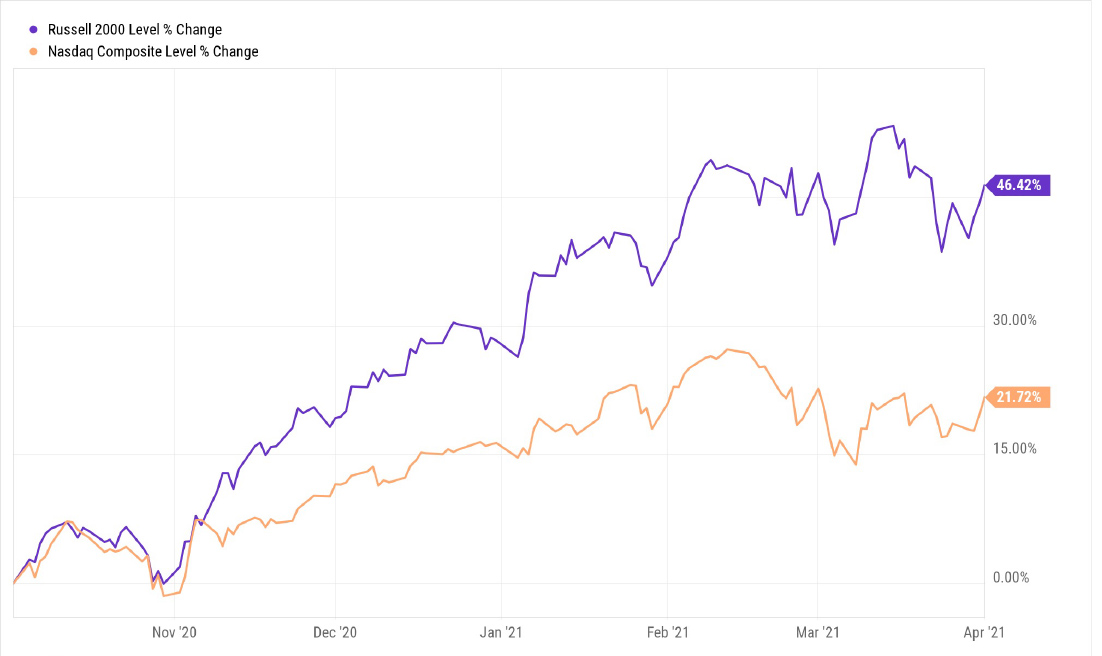 What is Happening Today?

In the spring of 2021, uncertainty again plagued the markets as the early stages of international vaccine program implementations were offset by the worries around new COVID variants and the threat of further lockdowns. For traders who had tracked the movement of the two indices, a familiar pattern began to emerge. The Russell 2000 started to move sideways as the fear of bad news acted as a counterbalance to the good news of vaccine rollouts. That sideways trend continues today as the index remains down 0.35% as of November 26, 2021, from April 2, 2021 levels.

On the other hand, the Nasdaq has rallied a further 15% in the same period.

The Bias Towards Large-Cap

Looking at the index performance of both indices, it is clear that markets anticipated technology companies to be substantially more resilient to COVID-19. But why was this sentiment so prevalent? From a fundamental standpoint, a few reasons could have contributed to the cause.

Firstly, larger companies are perceived to have stronger balance sheets and larger cash reserves that they can dip into when the going gets tough. Even if operations were disrupted for some time, larger companies generally possess deeper resources to weather short-term storms compared to smaller companies that typically do not enjoy the same level of liquidity or balance sheet stability. A caveat to note here is that these are generalizations and not necessarily true of all companies within the indices. Some small-cap companies remained highly resilient to COVID-19 due to excellent financial management. In contrast, some large-cap companies were forced to make substantial job cuts and cost reductions to stay afloat.

The second reason was the perceived level of government support available to be provided to companies of varying sizes. Mid- to large-cap companies employ thousands of workers across the country. Allowing them to fail would be catastrophic for the government, which would have to manage the consequences of a rapid spike in jobless claims. On the other hand, the smaller companies of the Russell 2000 – which generally have a payroll in the low to high hundreds – pose a significantly smaller risk to the wellbeing of the overall economy in the event of failure. While this may not seem like an equitable outcome, governments sometimes have to make these tough decisions to prioritize their support, given the finite number of resources that they have at their disposal.

The last – and perhaps the most important reason – is that the markets view the technology companies as better equipped to support revamped operating models resulting from pandemic restrictions such as social distancing guidelines. These restrictions may manifest changes in several ways as people increasingly begin to work from home (as opposed to an office), shop on e-commerce (as opposed to brick and mortar stores), and seek home-based entertainment (as opposed to going outdoors). In this ‘new normal,’ technology companies that cater to these specific demands are priced at a premium while small-cap stocks continue to remain flat as investors tread cautiously.

How Can I Take Advantage?

Under conventional circumstances seen historically, the Nasdaq and Russell 2000 index were highly correlated as the US markets enjoyed a prolonged bull run. However, as the narrative underlying the pandemic has unfolded, these correlations have ceased to be as predictable as in the past.

For retail traders, these divergent patterns of late represent a distinct opportunity. If traders believe that a new wave of lockdowns was impending due to a specific catalyst (say, the Omicron variant, for example), then it would stand to reason that the Nasdaq would be the better bet owing to the reasons mentioned above.

If traders held the opposite belief that the pandemic’s worst days were over and we were on the verge of sustained economic growth, then they would be best placed to take a long position in the Russell 2000 index on account of the outperformance it demonstrated throughout fall 2020 to early spring 2021 when markets turned the corner and became more optimistic around the reopening of global economies.