The Basics of an IPO Lock-Up

Global-E Online is a recent IPO, and IPOs have what's called a lockup. If we look at GLBE, GLBE has 15 million shares. Those 15 million shares were priced at $25.00, which is going to equal an offer size of $375 million.

Basic math. They actually do it for us, but I just want to show you where I got this $375 million number from. The number of shares on the offering is 15 million, which means that 15 million shares are available to trade in the open market. But, the shares that are outstanding is 142 million shares outstanding. These shares are not allowed to be sold until the lockup period ends, November 8th.

This company went public at $375 million valuation. Since May, this company has traded up 150% and is now trading $66.00, on 1/10th of the overall outstanding shares. What do you think will happen when all these shares are able to be traded?

What would you do if you worked there, and you get that $1 million worth of stock on the IPO, but they said, “Hey, John, here's a $1M worth of stock.” You're not allowed to sell for six months. After six months you could sell if you want to sell, but now, $1 million that you received is worth $2.5 million.

Let me also say that, when GLBE went public, they went public by the investment bankers, and the investment bankers did their best to value the company. Do you think that the bankers went through all their documents and then five months later, they were so off that the price is 150% higher? Does that smell fishy? Does that feel above-board or does that feel a little weird?

This is most important because to consider this trade, you’ll need to be in November or later, because you want to be within the lockup period.

Question: Where did I get the 142 million? It went public with a market cap of $375 million market cap. Look at the market cap now. Insiders are long the underlying stock from a valuation of $375 million, on an asset that is presently trading at a $9.36 billion. Insiders are not allowed to sell until November 8th. They're watching this price every second of every day, and sweating, hoping, begging, that it stays higher.  My guess is that it will not, highly doubtful that the market waits for all the insiders so they can sell.  I would be shocked!

Question: How Did I Find This Trade?

In my analysis I went through all active lockups because I wanted to share a wing-dinger with the Wiretappin’ community. So, here it is:  $GLBE

This trade gets better because earnings are coming up as well, in this same November expiration cycle. Now, the issue is going to be the markets are wide. When we say wide markets, it's $6.00 at $7.60, $3.70 at $5.50, but they options are still trading. Traders don't have to worry if there's not open interest, on any given strike. Traders just need to try to get filled and if there’s liquidity on the underlying stock that’s plenty.  Remember, Options are just derivative of the underlying stocks.  Options are stocks with leverage, lots of leverage. What I like to do is put your trading platform on “last trade”, and see what levels have been trading.

The community Discord for members is a great place to discuss lock up trades, Unusual Options Activity trades, position management and any other topics that members have questions.  As we like to say, we’re not trying to save-the-world – we’re just looking to grow our trading accounts. 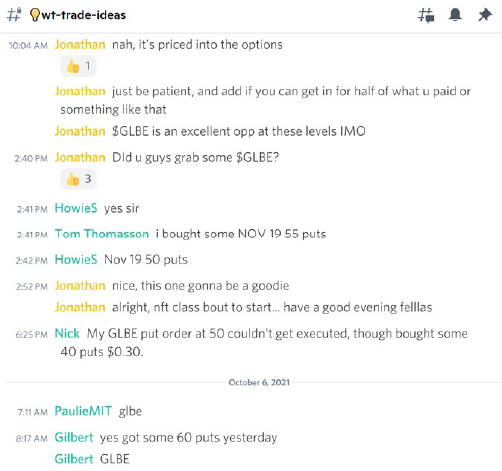 Remember, stay out of October because that expiration does not include the lock-up event of the Earnings announcement. So, it's really important if you're consider this trade, you want to be in November, or even further out. But, it wouldn't surprise me to see GLBE trading under $45.00 by November expiration. 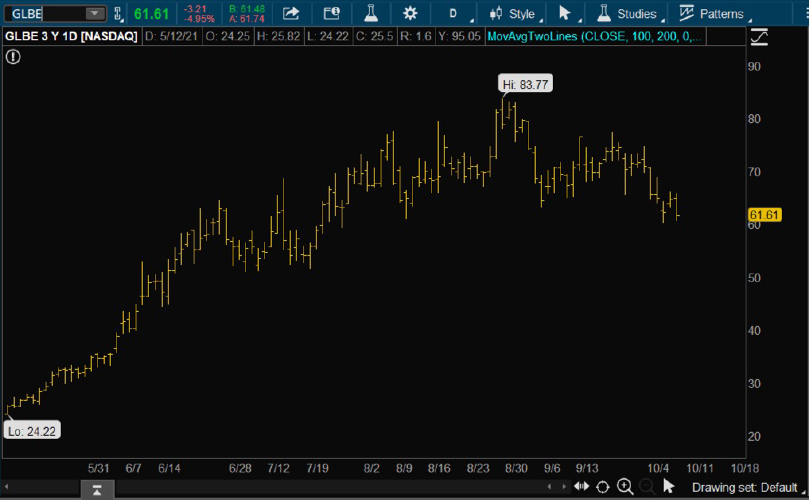