On April 26 we looked at RIOT options, and it was followed with a write up. The write-up from April 26 can be found towards the bottom of the page. Basically at that time, calls were 2.37X more expensive than puts – and the ATM straddle was pricing in $10 move within 24 days. At the time of writing, $RIOT was trading at $40-$41. The $50 strike call option had a .33 delta and was worth around $2.44. The 30 strike put had a .14 delta, and was worth $1.03.The way I traded $RIOT was buying the $50 strike calls, and 2x the amount of $30 strike puts, to even out the deltas. In the write-up (below), we noted how even though the market was skewed to the call side with extreme measures, it did not mean that the skew couldn't reverse from one day to the next. Today $RIOT traded down into the $27s – and the $30.00 strike puts got up to $4.15 or so. I liquidated half of my puts at $4.05, and have buy orders at $25.00 for the stock. The 50 strike calls, even after this move, continue to hold onto extrinsic value even though the clock is running out on these options (10 days). This was one hell of a trade! Hope some of you caught it!

A few weeks ago, on or around April 19, I posted about QQQ downside levels. I mentioned the monthly downside implied move was $321.00. Hope none of you were surprised to see the bounce come from levels not too far away from this number. Based on HVT on a daily chart for QQQ, this level also matches up with what we saw today. Personally, I'm buying the crap out of this dip. May options, 336 calls. If the broader downside move in QQQ is going to continue, I'd expect a bounce at least up to this level. However, keep the 321 in mind. If we trade below this level, specially if we close below it, I expect downside volatility to pick up quickly – just as you saw happen this morning. Downside targets, should 321 break are 305 and 285 from my analysis. But while that happens, I'll take some cheap, non-linear, convex bets at some QQQ upside.

We have ongoing Auctions taking place on May 11th, May 12th, and May 13th – with a final settlement date of May 17th.These are some large auctions. Are you surprised that the whole market is being sold while these auctions are ongoing? Dealers need liquidity – so they liquidate anything they have just to be able to obtain the most valuable asset for the Repo market – short term Treasuries, particularly the “on the run” (most recently issued) security, as this is the most liquid one in secondary markets. All traditional financial exchanges rely on a being able to pledge Treasuries and borrow cash on a day to day basis. [nothing prevents the lending institution that now has the collateral from using it again, pledging it as collateral in the repo market to get cash. This is called “rehypothecation” – and its the sole reason why there's such a relentless bid under T-Bills. If this theory is accurate [that the overall market downturn is due to a temporary liquidity shift due to the large auctions], we should see asset prices rise again tomorrow and the day after – as the auctions get smaller on the 12th and 13th – thus less need for liquidity. After the 17th, dealers receive Treasuries, and Treasury receives funds. Dealers then take these Treasuries, and use them as collateral to borrow even more funds to put back into risk assets, as described above. TLT appears to be “stuck” – I like the risk reward in buying the June 140 calls and the June 135 puts. Volatility is still relatively cheap.

Since most stocks went on sale today, I used this opportunity to load up on some of the Canadian Uranium names currently trading for under $2.00. Thanks for whoever pointed out $DNN! cc: Jonathan Rose

We've seen $RIOT pop up in the Wiretapper, enough to make it into our Sunday Week Ahead trade ideas. On Monday, April 26 2021, during our weekly live webinar, we explored the $RIOT options and noticed how much skew was built into the calls. Some further analysis is warranted on this name, as I believe its one filled with opportunity to profit. If we take a look at the current May $RIOT options, we'll see that the straddle (the At-The-Money, aka ATM call and put option) we can see that the price is implying around a $10.60 higher or lower move within the 24 calendar days left until the May options expire.

In fact, lets take a look at the May options. Something quite interesting is happening here. Stock is trading close to $40 (closer to $41 when the data snapshot was taken, but for the sake of this example, this difference won't matter). 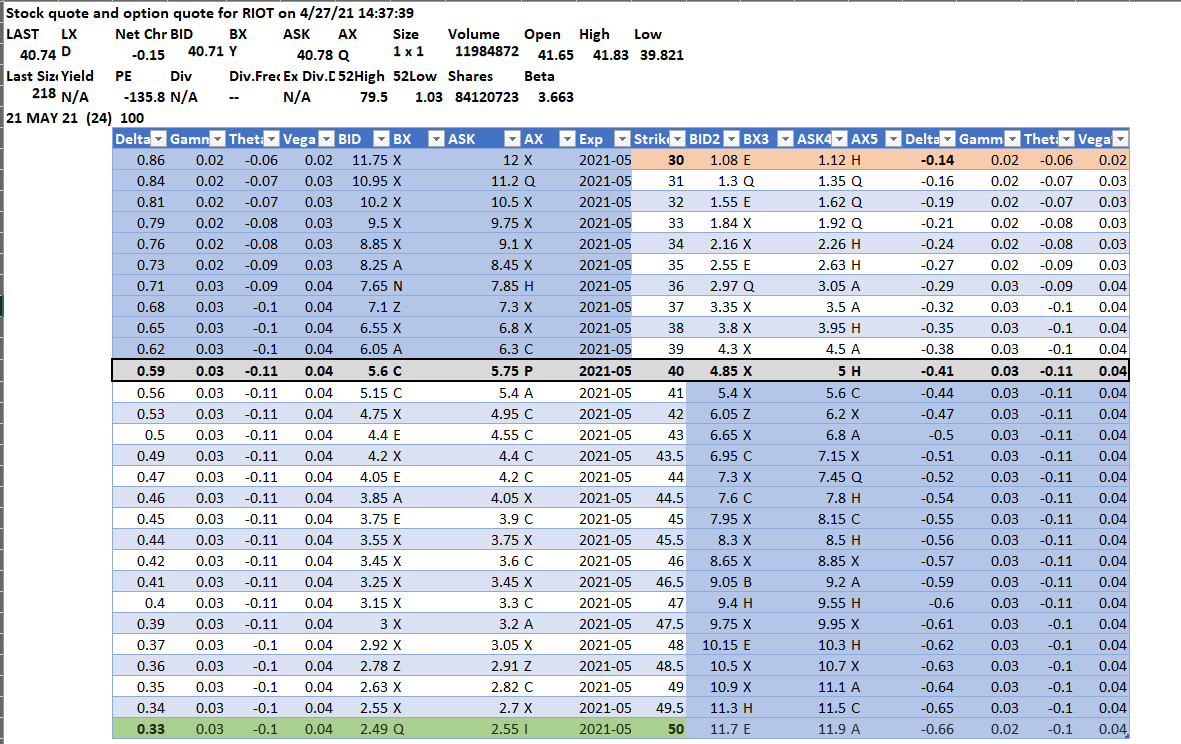 If we use the amount of movement implied by the ATM straddle, $10, and we go out 10 strikes OTM (Out of the money) on both the calls and puts, what we find is what's referred to as “skew”. The $10 implied move is “skewed” to be an upside move; As you may see, the 50 strike call – $10 away from the ATM, is trading for $2.50 approx, and has a delta of 0.33. Also notice that the OTM side of the options chain has .5 strikes listed, but the OTM puts dont (lack of demand). If we look at the 30 strike put, also $10 away from the ATM strike, we find that the option is trading for approx $1.10. The call is 2.27X more expensive than the equidistant OTM put. How about the deltas? We find that the 50 strike call delta of 0.33 is also 2.35X larger than the 30 strike put delta of -0.14. But as we know, markets can turn from one day to the next. The skew can change drastically from now till expiration. Thus, one way to possibly benefit from a $10 move in either direction is via the purchase of both the 45 strike call and the 35 strike put for $3.80 and $2.55 respectively. We know that the cost of our call is more expensive, but it's being compensated by the cheaper put. We're also using options that are both $5 points away from the ATM, such that if we get a $10 point move in $RIOT, either our call or our put will be ITM by $5, giving us plenty of opportunity to lock in profit as the stock moves during the next 24 days. There are other ways to play this stock, such as just using upside calls, a call vertical spread to take advantage of the skew, or taking the opposite side of what the market is implying and just using the cheaper puts. Many options for trading $RIOT options! Pablo Lucena