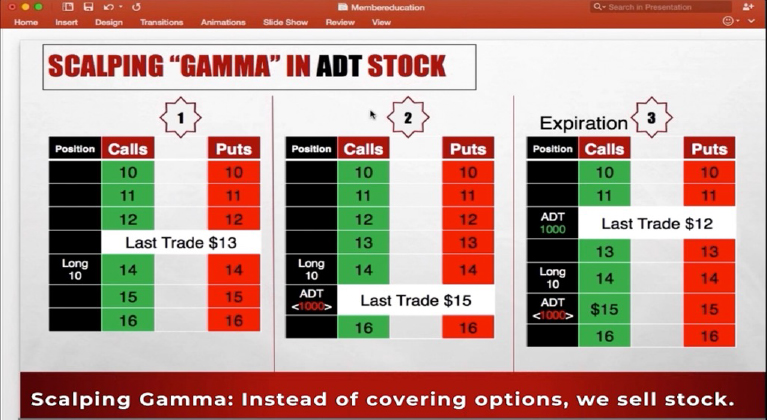 So, here are three different options trades. We’ll start with trade #1. Last trade $13. I have the calls in green and the puts in red. Let's buy a phony 10 lot at the 14 strike for the calls. The last trade in the stock is 13. Now, when we do this, all we're doing is we're buying stock at 14. So, the last trade was 13, and we're buying the 14 calls. We are long volatility.

If these were weeklies and it was Thanksgiving, we probably shouldn't expect this stock to move to 14. Thanksgiving is a low volatility week. We’d probably want to be selling these 14s, but I doubt we'll be able to get enough premium that it's worth our troubles. So nevertheless, let's buy 10 of these 14s.

Trade 2: Getting Rid of our Risk

Now, in trade #2, the stock goes up to 15. We're still long 10 from 14. The example charts don’t include any prices because I don't want to get caught up in the prices. Prices don't matter for this example. When we're long those 14 calls, we're long stock at 14. The last trade and the underlying is 15. If we want to cover those calls, we can sell 1000 shares at 15 because when we're long 10 from 14, that's the same as being long 1000 shares at expiration at 14. When we sell 1000 at 15, we're taking away our upside because we're covering our trade, but we're also taking risk off the table. We no longer have risk in this trade. It's advantageous. It's far better than selling those 14 calls unless you can get a really good price on this. Unless there's a market like Apple where those 14 calls are trading above like $1.40 or $1.50, and you can get out. But most of the stuff that we're trading is not necessarily going to give you great markets. So what you can do is you can sell 1000 shares at  15. Now, if this stock goes to 20, you don't care. You're done because you're long 1000 shares at 14 and short 1000 shares at 15. So just let those expire. You just made a thousand dollars, less whatever you pay for it. You're done.

Trade 3: Synthetically Rolling our Long Call Into a Long Put

Now, in trade #3, let's call this expiration, if this same stock now drops down to 12, our 14 calls are going to expire worthless. So those are zero. So when we sold this 1000 shares at 15, we did so because we were long 1000 shares at 14. But now with the stock at 12, these calls are now worth zero. So we now have to buy back these 1000 shares. So in this trade, we're able to make $3,000 from selling 1000 shares at 15 and buying them back at 12. And that's why you really want to trade stock and not necessarily just cover your options. We covered our upside, right? We have no more exposure on the upside. And now we have unlimited exposure on the downside, or at least down to zero. We just synthetically rolled our long call into a long put, because if you're long a call and short stock, you have synthetically made yourself long a put.

We can use this methodology whenever we want to limit our risk. So in this example (trade #3), we're long 10 calls from 14, you can sell up to 1000 shares. So at 15, you could sell 200 shares, or 300 shares. You're reducing your risk. You're locking in a profit and reducing your risk. You can't sell 1100 shares or 1200 shares because then you're going to have short exposure. So if the stock goes up to 25, you're going to lose money. But you could always think of it that when you're long 10 calls on the 14 strike, you're long 1000 shares from 14 at expiration. So at any time if you want to limit your risk, you could always sell shares. We know that all the trades that we put out at Masters In Trading are cheaply-priced relative to where they historically trade.

So we already know we're in there with good value. Now, we're just looking for more escape paths. And what this does is the last trade of the stock is 13. If that stock goes from 14 to 12, 14 to 12, 14 to 12 every single day for 10 days, somebody not familiar with this strategy might look at it as a terrible trade. But for me, I look at that as saying, “Wow, that's a great trade. I'll do that all day. If this stock is volatile, 14, 12, 14, 12, 14, 12, but it's not really going anywhere.” So it gives you another opportunity to make money and finance your trade, which is overall helping you manage your risk.

Having this approach as another way to escape your position puts you in far better odds than just holding those calls all by themselves. So that's why you want to learn as much as you can before you're out there risking money.