To measure different aspects of inflation, various indices have been devised including:

This article will focus on the Consumer Price Index, which is widely regarded as the most accurate inflation indicator because it represents consumer habits and their changes.

The CPI, a key economic index

The Consumer Pricing Index, or CPI, is one of the most important price indicators for consumer products and services in the United States. It denotes both inflation (price increases) and deflation (price decreases).

The Federal Reserve keeps tabs on price rises to keep the economy on pace. It utilizes monetary policy instruments to respond if it detects excessive inflation or deflation.

Economists use the CPI to track changes in the costs of a typical basket of goods and services. It does so by comparing price variations in a reference period; the CPI is normally calculated on a monthly or quarterly basis. It is based on the spending habits of city dwellers and includes people of all ages. 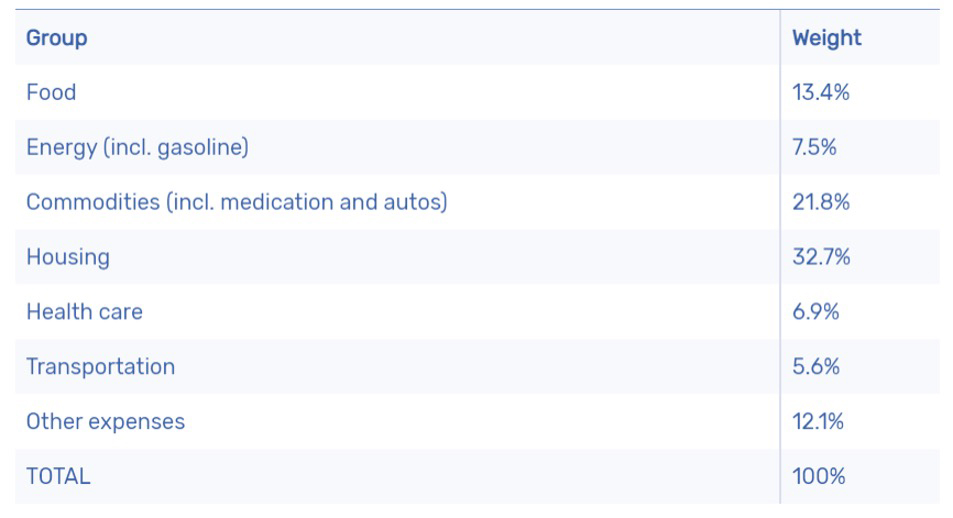 The CPI market basket is built using comprehensive expenditure data provided by the citizens’ expenditures. It is worth noting that between the expenditure survey and its inclusion in the CPI, there is a time lag: CPI data for 2020 and 2021, for example, were derived from consumer spending surveys conducted in 2017 and 2018. In each of these years, roughly 24,000 consumers from around the country participated in the quarterly interview survey, providing information on their spending habits

CPI changes are normally expressed in percentages, with positive variations indicating inflation and negative ones indicating deflation. Keeping inflation under control is a primary priority of central banks like the Federal Reserve, which they accomplish by adjusting monetary policy, such as the base interest rate.

Limitations of the CPI

The CPI may not be applicable to all population groupings, which is one drawback. The CPI-U, for example, is designed to gauge inflation for the United States’ urban population and hence may not fully reflect the reality of people living in rural areas. The CPI does not provide official estimates of inflation rates for certain population groups, such as the elderly or the impoverished.

Another disadvantage is that the CPI cannot be used to compare price levels or cost of living between different areas because it only measures changes in each location over time. A higher index for one place does not always imply that prices are greater there than in a lower-index area. Rather, it signifies that prices in the area with the higher index have risen faster than in the other, based on the same base period. Furthermore, aspects such as social and environmental changes and income tax changes are not included in the index assertion.

Measurement weaknesses, such as sampling bias, are also present. The published indexes differ slightly from the results that would be produced if real records of all retail purchases by all members of the index population could be used to create the index. It represents a constraint on the index’s accuracy.

The CPI-U increased by 1.2% in March 2022, translating to a 15.4% compound yearly rate. Similarly, the all-items index has increased by 8.5% in the last year. This is the steepest 12-month price increase in 40 years and the biggest year-over-year price increase since December 1981.

The majority of the rise was due to increasing fuel costs, which surged 18.3% in the month. Many other sub-categories, however, have also suffered repercussions.

Almost all categories have increased, as seen above, such as the food index (up 1.0%), transportation services (up 2.0%), and medical care services (up 0.6%).

In response, the Fed hiked interest rates to keep inflation under control. This is meant to increase borrowing costs, which should assist in reducing demand for consumer products and corporate supplies while also easing upward pricing pressure. Nonetheless, the inflation forecast remains bleak, and many experts fear a future recession.

Matthew Levy is a Chartered Financial Analyst (CFA) designation holder, and has been in the finance industry since 2010. A former portfolio manager for $600+ MM in assets, Matthew started his own business in 2019 writing financial analysis for clients worldwide. He provides commentary and blog insights for Masters in Trading on a regular basis, and is always open to chat about travel and sports!