What is the most liquid market with the most volume traded each day?  U.S. Treasury Bonds? Nope!  U.S. Equities? Nope! Believe it or not – Foreign Exchange! Daily Foreign Exchange trading volume is multiples of global equity and fixed income volumes.  These markets are truly global, trading 24 hours a day.  The primary dealers are larger multinational banks rather than exchange-based market makers that are typically seen for stocks, options, and futures.

How are Foreign Exchange Trades Priced

The approach to Foreign Exchange is different than most other markets or instruments.  At Masters In Trading, relative value is the basis for many of our trades. For example, Gold is not cheap or expensive on its own.  Gold is cheap or expensive relative to its historical relationship with the other metals.

Foreign Exchange is actually priced in relative value terms; each currency is priced based on its relative value to another currency.   For example, as of this writing, 1.0 Euro is worth about $1.07.  In other words, if a trader thought the Euro was undervalued and wanted to buy 100 Euros, the trade would be pay $107.00 in return for the 100 Euros.  If the trader is right and the value of the Euro increases to $1.15, the trader would sell the 100 Euros in return for $115.00 or a gain of $8 or about 7.5%.

Foreign Exchange quotes take a little getting used to; the symbols represent quoted pairs.  For example, the Euro – U.S. Dollar quote will be found under the symbol EURUSD.  The first three letters, in this case EUR, represent the “base currency”.  The second three letters, in this case USD, represent the “quote currency” or “price currency”.  The quote indicates how much of the quote currency a trader will pay or receive when the trader is buying or selling the base currency.  In the example used above, the quote for the EURUSD is $1.07.  So, the trader will pay or receive $1.07 for each Euro purchased or sold.

The most popular, liquid currency pairs are:

Two Examples of how To Trade Currencies

As reviewed above, Masters In Trading focuses on relative value to identify trade opportunities.  Buy what’s relatively cheap and/or sell what’s relatively expensive.  Trading currencies opens up a wide variety of relative value trades based on one currency’s value relative to other currencies, metals, energies, bonds or even equities.  Let’s look at two potential opportunities using Masters In Trading newly released Currency EDGE Tool. Please keep in mind that there are many factors affecting these opportunities given the current trading environment with geopolitical and economic uncertainty, the Federal Reserve, and other central banks tightening (or in some cases relaxing) monetary policy, the impact of inflation, supply chain disruptions, etc.

Take a look at the chart below – the value of the Yen relative to the U.S. Dollar.  On a 3-year, daily chart, the Yen looks very inexpensive relative to the Dollar.  A potential trade would be to buy the Yen and sell the Dollar.  In other words, sell the USDJPY. Unlike many other relative value trades, currency trades can be executed in one transaction rather than two! 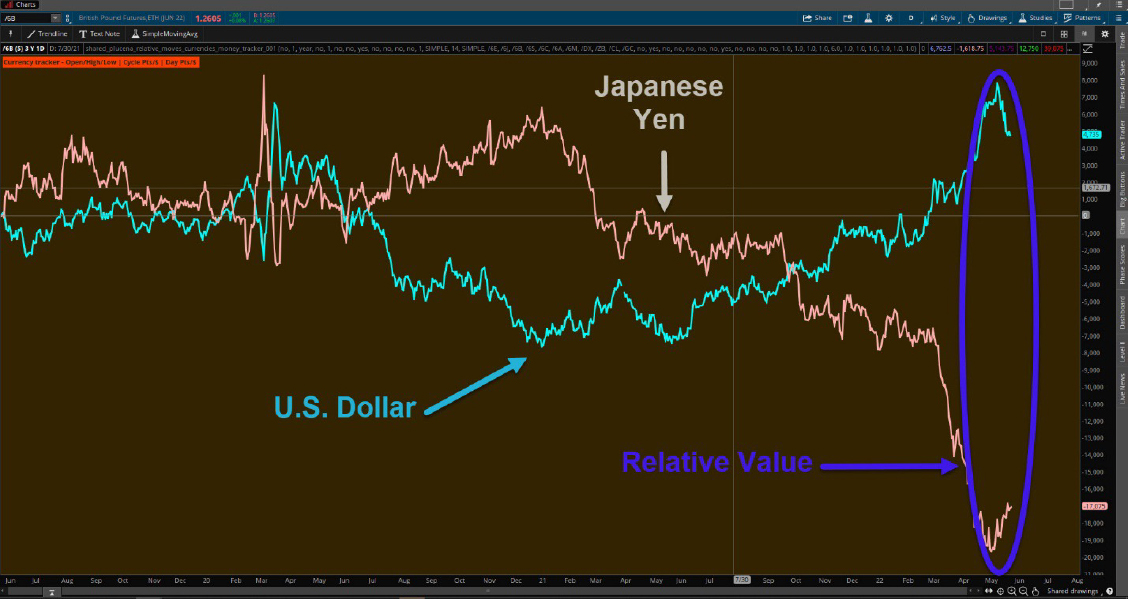 Notice in the chart below, that Oil and the Canadian Dollar have recently separated.  This may present another trading opportunity, long the Canadian Dollar and short Oil.  This is a much more advanced trade that would be expressed with futures, but it shows the power of trading relative value with the Currency EDGE Tool.

There are many different ways to trade currencies.  For example, a trader can use the currency pairs described above and/or futures, options on futures, ETFs and/or options on ETFs.  Please paper trade if you don’t have experience trading currencies until you have the risk/reward trade offs and trade management down cold.  As always, trade sizing and trade management are more important than getting the perfect trade entry!