Read Part 1 of this Series.

Bonds are in play as The Fed tightens monetary conditions and drains liquidity from the economy.   The increase in bond volatility can be seen on Masters In Trading Futures Edge Web-based Charting Platform: 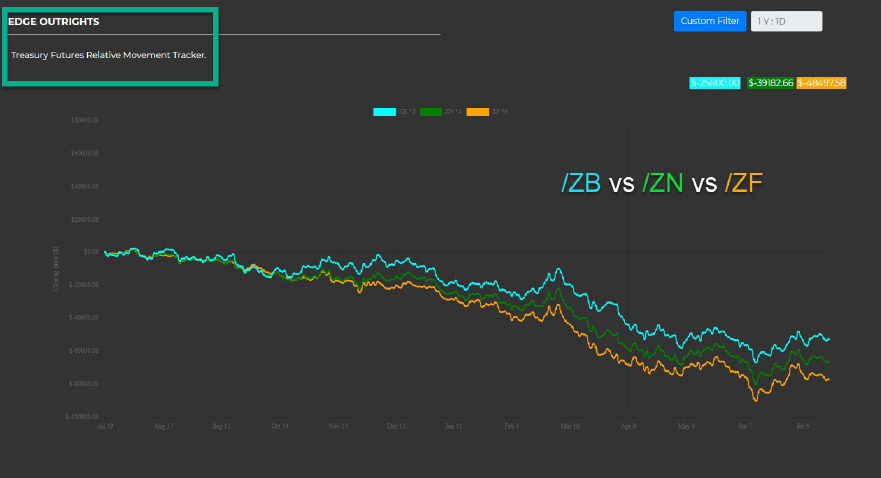 In our last post, we reviewed the U.S. Treasury’s bond auction process and the role of Primary Dealers.  In Part 2, we discuss analyzing the results of an auction and what this analysis can tell us about short term, and possibly longer term, demand for the auctioned securities and other points along the yield curve.  A strong auction result can indicate positive investor sentiment and considerable demand that can continue in the secondary market.  Of course, a weak auction can indicate the opposite.

How to Determine a Treasury Auction’s Results

The analysis of any particular Treasury security auction is based on several measures: 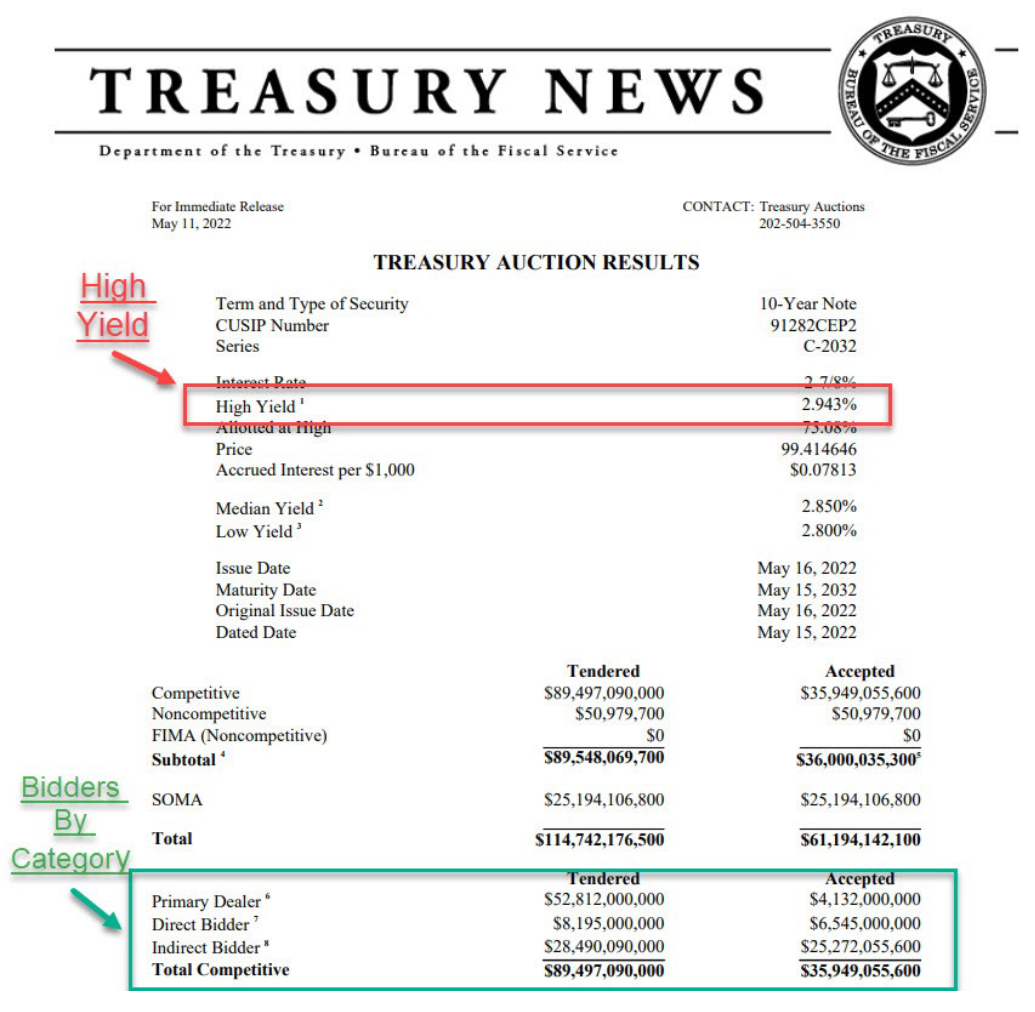 How to Interpret Futures Price Action Before & After the Auction

Bond futures price action before and after the auction can give an indication of the strength or weakness of an auction and whether or not the results were in line with expectations.  The /ZN (10-year futures) chart for the May 11th 10-year auction is shown below: 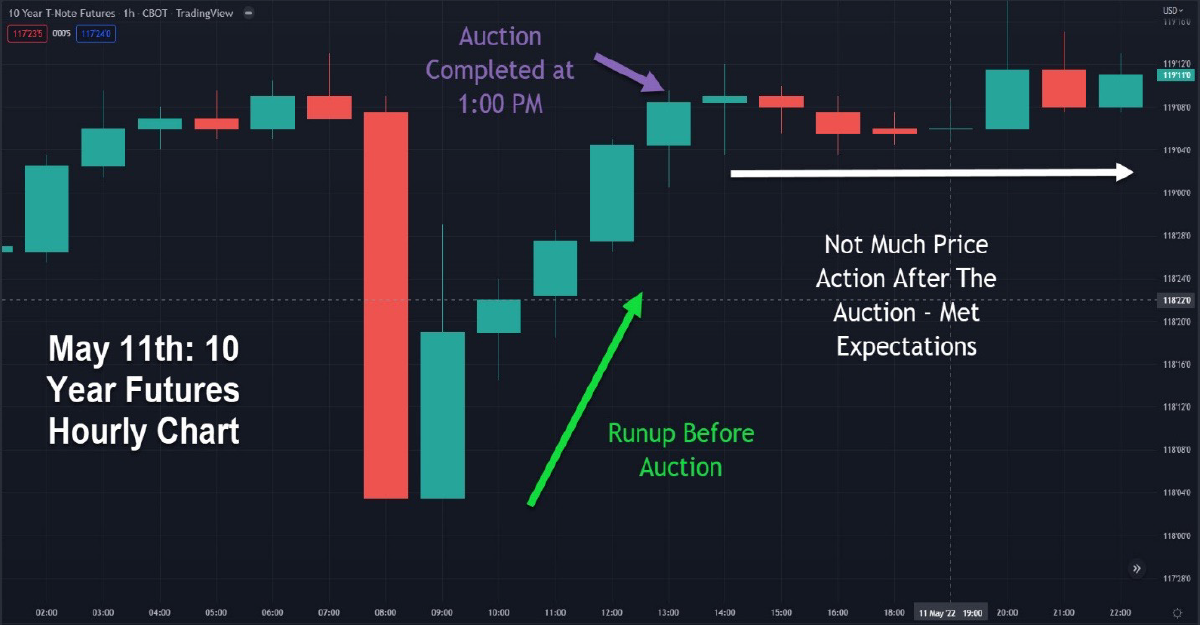 After an initial morning sell off, 10-year futures prices fully recovered into the auction indicating positive expectations.  The auction results appear to meet the market’s expectations as prices traded sideways the rest of the day.

What is the Bid to Cover Ratio

The Bid to Cover Ratio is the ratio of submitted bids in the auction relative to the amount of bonds sold.  In the example above, $89.5 Billion in bids were submitted and $36.0 Billion were sold for a Bid to Cover of about 2.49.  The ratio for any particular auction can’t be analyzed in isolation but should be compared to prior auctions of securities with the same maturity.  This was a somewhat weaker auction as the four prior 10 year note auctions averaged a ratio of 2.52.  Keep in mind that this ratio can be manipulated by Primary Dealers submitting a lot of lower yield bids that they know won’t be accepted, artificially increasing the Bid to Cover Ratio.  This can result in the false impression that auction demand is significantly stronger than would otherwise be indicated.

How to Evaluate Bidders By Category

Auction results summarize bond purchasers according to three categories:  Primary Dealers, Direct Bidders, and Indirect Bidders.  The role of Primary Dealers in the auction process was reviewed in Part 1. In this auction, Primary Dealers accounted for 59% of all bids.  Non-Primary Dealers that submitted bids directly for their own accounts represented 9% of all bids.  These direct bidders generally include pension funds, hedge funds, insurers, banks, etc.  Indirect bidders that submitted bids for their own accounts but through a direct bidder accounted for the remaining 32% of all bids.  Indirect bidders include foreign central banks, international monetary authorities, and other asset managers.  A relatively higher percentage of direct and indirect bidders is viewed as a positive auction outcome and stronger demand.   The direct and indirect bids for the last four auctions were about the same as this auction at 42% indicating that auction demand was about average.

What is The High Yield

The High Yield is the highest interest rate that the Treasury must pay to sell the desired quantity of securities.  In this auction, the Treasury wanted to sell $34.0 Billion of 10-year notes.  The Treasury had to pay a yield of 2.943% to sell all the notes.  In other words, all accepted auction bids were submitted at a yield of 2.943% or lower.  This result is harder for a retailer trader to evaluate as they don’t always have access to all the necessary data.  The key is to compare the High Yield to the “When Issued” yield traded just before the bidding deadline.  “When Issued” versions of the new security will start to trade after an auction is announced but before the auction is held and the securities issued as a way for market participants to conduct price discovery and estimate auction demand and reduce uncertainty and volatility around the auction High Yield.  “When Issued” information is very difficult for retail traders to access so evaluating the High Yield relative to market expectations based on “When Issued” trading relies on professional level data.

As a starting point, watch for auction announcements in the financial press or on the TreasuryDirect website and then monitor the chart of the relevant futures contract from the time of the announcement through the actual auction, paying special attention to price action around the release of the auction results (usually at 1 PM Eastern time).  In general, a rally in futures indicates strong demand and a drop in futures suggests just the opposite.  Analyzing the results as suggested above and monitoring the financial press can the provide additional insight into the auction results.